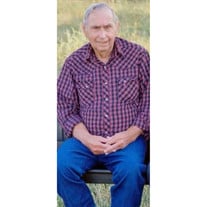 William Howard Weathers, 84, of Huntsville; died Tuesday, January 5, 2021, at Northwest Medical Center, Springdale.  He was born Friday, October 23, 1936; at Huntsville; to William Herman and Jessie M. McBroom Weathers. Bill married Roberta Laningham on Saturday, December 7, 1963 at Huntsville; and together they were parents to one son.  He was a heavy equipment operator, running a backhoe for many years at Tyson Foods.  He proudly served his country in the United States Army, and was a member of the American Legion.  Bill loved fishing and enjoyed working on his farm. Bill was preceded in death by his parents.  He is survived by his wife, Roberta, of the home; one son and daughter-in-law, Jerry and Lorene Weathers of Huntsville; two grandchildren, Shana Burnett of Huntsville, and Rusty Burnett and Baleigh Johnson of Huntsville, and one sister and brother-in-law, Jeanette and JD Hawthorn of Huntsville. Graveside services will be 2:00 PM, Saturday, January 9, 2021, at McBroom Cemetery with Jim Spurlock officiating.  Pallbearers will be Tim Stroud, Scott Carlton, Jon Bowman, Aaron Whorton, Jamie Don McLoud, and Rusty Burnett.  Services are entrusted to Brashears Funeral Home and Crematory of Huntsville.

The family of William Weathers created this Life Tributes page to make it easy to share your memories.

Send flowers to the Weathers family.