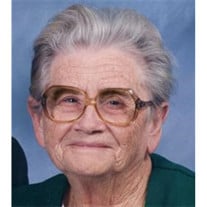 Vada Marie Reeves, 97, of Huntsville, Arkansas, died December 20, 2016 at Meadowview Healthcare and Rehab in Huntsville, Arkansas.  She was born May 22, 1919 at Mulberry, Arkansas, the daughter of Robert Lee and Minnie Ellen Lovitt Crabtree.  She held a Bachelor of Science in Education from the University of Arkansas and had taught in public schools for forty-two years.  She was a member of Faith Southern Baptist Church in Huntsville and was the widow of Dillard Lee Reeves who preceded her in death  on May 27, 2008.  She was also preceded in death by two brothers, J. R. Crabtree and Julian Crabtree.Survivors include: two daughters and one son-in-law, Luetta Reeves of Huntsville, Arkansas and Wilda Lee and James Garrett of Powder Springs, Georgia; one grandson, Kyle Garrett of New York; one granddaughter, Kristin Bentley of Atlanta, Georgia and five great-grandchildren.Funeral services will be held at 10:00 A. M. Thursday, December 22, in the chapel of Brashears Funeral Home with The Reverend Alex Martin officiating.  Interment will be in the Witter Cemetery under the direction of Brashears Funeral Home www.brashearsfuneralhome.net of Huntsville, Arkansas.  Pallbearers will be: Bobby Reeves, Will Reeves, Curtis Reeves, Caleb Reeves, James Earl Waters and Randy McGee.

The family of Vada Marie Reeves created this Life Tributes page to make it easy to share your memories.

Send flowers to the Reeves family.