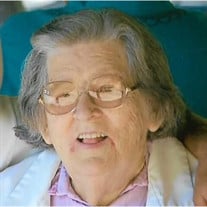 Truley Mae Scates Clark, 92, of Springdale, Arkansas, died October 17, 2017 at Circle of Life Hospice in Springdale, Arkansas.  She was born January 5, 1925 at Burkburnett, Texas, the daughter of Thomas Edward and Cora Mae Wilkerson Pribble.  She had been employed by Campbell Soup Company and Tyson's Foods and was a Baptist.  She was preceded in death by her husbands, Henry Scates and William Clark, two sons, Hershel Scates and Harvey Thomas Scates, two daughters, Georgie Mae Scates and Eathel Fay Scates and by one grandson, Terry Lee Scates.  Survivors include: two sons and daughters-in-law, Thomas and Shirley Scates of Huntsville, Arkansas and Hayden and Betty Scates of Spring Valley, Arkansas; one daughter and son-in-law, Judy and Olen Woodell of Springdale, Arkansas; five grandchildren and ten great-grandchildren.Funeral services will be held at 10:00 A. M. Saturday, October 21, in the chapel of Brashears Funeral Home with The Reverend C. H. Doss officiating.  Interment will be in the Marshall Cemetery at Forum, Arkansas under the direction of Brashears Funeral Home www.brashearsfuneralhome.net of Huntsville, Arkansas.  Pallbearers will be: Garrett Wieland, Laramie Wieland, Stacy Wieland, Tommy Scates, Tony Ray Herrington and Tyler Herrington.  The family will receive friends from 6:00 P. M. to 8:00 P. M. on Friday at the funeral home.

The family of Truley Mae Clark created this Life Tributes page to make it easy to share your memories.

Send flowers to the Clark family.