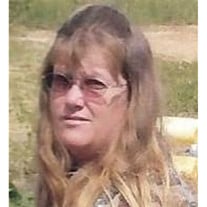 Susan Marie Gulledge, 44, of Crosses, Arkansas, died January 2, 2018 at the Willard Walker Hospice Home in Fayetteville, Arkansas.  She was born September 19, 1973 at Huntsville, Arkansas, the daughter of Dannie Eugene and Glynda Sue Watkins Clark.  She was a homemaker and a member of the Church of Christ.Survivors include: her husband, Rick Gulledge of the home; one son, Dilon Wayne Gulledge of the home; one daughter, Brittany Sue Gulledge and Raymond Martin of the home; one grandson, Trevor Ray Martin, of the home; her parents, Dannie Eugene and Glynda Sue Clark of Japton, Arkansas; her father-in-law and mother-in-law, Bud and Diane Gulledge of Crosses, Arkansas; two sisters and brothers-in-law, Elizabeth and Ronald Baker of Delaney, Arkansas; and Lorie and Robin Hollingsworth of Japton, Arkansas; one half-brother, Cory Martin of Huntsville, Arkansas; and several nephews and nieces.Funeral services will be held at 10:00 A. M. Friday, January 5, at the Japton Church of Christ with Todd Stephens officiating.  Interment will be in the McChristian Cemetery under the direction of Brashears Funeral Home www.brashearsfuneralhome.net of Huntsville, Arkansas.  Pallbearers will be: Jamie Gulledge, Stephen Gulledge, Tyler Hollingsworth, Richard Baker, Hunter Schulze and Wade Swofford.  The family will receive friends from 5:00 P. M. to 7:00 P. M. on Thursday at the funeral home.

The family of Susan Marie Gulledge created this Life Tributes page to make it easy to share your memories.

Send flowers to the Gulledge family.