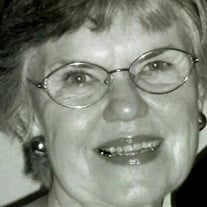 Sarah Peacher Beard, 83, of Springdale, Arkansas passed away on January 21, 2022. Born in Fort Smith, Arkansas, her family moved to San Antonio, Texas when she was seven years old. Sally loved her experiences at Thomas Jefferson High School and treasured her time as a member of the Lassos. She continued her enthusiasm at Southern Methodist University as a member of Kappa Kappa Gamma sorority where she formed many lasting friendships. While at SMU, Sally met the love of her life, Air Force Airman Barry Beard, of Houston, Texas, and began a whirlwind courtship and a lifetime of adventure. Her globetrotting began with a move to Europe, small children in tow, where she put her creativity to work navigating unfamiliar languages and cultures with her grace and southern charm. Sally dove into activities at the American Women's Clubs, scouting, and sporting teams. She was a demanding Scout leader with a compassionate heart and a listening ear. She grew to love both Munich and Luxembourg. A return stateside to Colorado introduced her to the Rockies where she continued her skiing with friends and family, supporting multiple school and church activities. Sally began work in the public schools, mentoring students and becoming an adopted mother to many. When the Hogs ultimately called her home, she and Barry returned to her beloved state of Arkansas. She greatly enjoyed interaction with international students at Spring International, at the University of Arkansas. She kept many relationships alive over the years and traveled to foreign lands to see former students. She also cherished being a doting grandmother thereby exemplifying her favorite expression, "grandchildren complete life's circle of love" Sally's fortitude and Christian faith radiated during her long, hard fought battle with Parkinsons' Disease. She amazed everyone with an unwavering focus on family and friends. Her children can only hope to live the remainder of their lives with the faith, grace, and confidence she exemplified throughout her life. Sally was the daughter of the late Al and Betty Groenlund Peacher. She is currently survived by her husband Barry Beard of Springdale, Arkansas; her son, Chip Beard (Suzanne) of Peachtree City, Georgia; her daughter Sheryl Fleener (Tom) of Washington D.C.; and five grandchildren. Tremendous gratitude to Countryside Assisted Living, Huntsville AR, where staff exude a servant's heart daily. A family memorial gathering will be held at a later date. Services are entrusted to Brashears Funeral Home and Crematory, Huntsville.

The family of Sarah Elizabeth Beard created this Life Tributes page to make it easy to share your memories.

Send flowers to the Beard family.