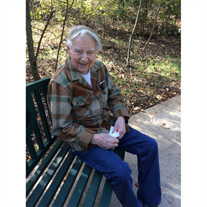 Paul Harry Jessing, 84 (though he would only admit to an age of 29), recently of Fayetteville, Arkansas; moved on to his heavenly home on Monday, April 13, 2020. Paul was born in Portland, Oregon; to Paul and Bertha Andos Jessing. Paul served his country as an aircraft mechanic in the United States Marine Corps, and received an honorable discharge in 1955. While in the Marine Corps, he received a Korean Service Medal, United Nations Service Medal, National Defense Service Ribbon, and Good Conduct Medal. He invited Jesus Christ as his Lord and Savior after leaving the Marine Corps and headed to Colorado where he met Audrey Ohman - they married in August, 1959. Together they had four girls, spending most of their lives in Washington state. He always said he wanted a 14-piece, all-girl orchestra. He made a point to read his Bible daily before eating anything and was always ready to pray for and with anyone. He enjoyed getting together in church fellowship and bible study groups.  Paul held a variety of jobs, primarily as a mechanic and in sales, always extolling the principles of Dale Carnegie. He was always willing to help anyone who asked in any capacity he could. He made friends wherever he went, impacting people's lives with his positive attitude and was an unofficial "greeter" at The Maples assisted living facility greeting visitors, residents, and staff as he sat by the fireplace in the lobby.  He was an upbeat and positive person and if you asked him how he was, he would always answer with a strong "Incredible!" He delighted in meeting new people and expressed genuine care and concern with a gift for encouraging others. Earlier in life he loved hiking in the Great Pacific Northwest and photography, and throughout his life, he enjoyed reading books and learning something new. He loved to dance, enjoyed pink moscato, and almost always had a cup of tea nearby. When asked about his hobbies, he said he enjoyed listening to music; especially swing, jazz, and classical, and had an extensive record collection. He enjoyed old classic movies and musicals. He was preceded in death by his parents, and three of his siblings, Lillian King, James Jessing, and Phyllis Jessing. Paul is survived by his four daughters and three sons-in-law, Shanna Jessing of Fayetteville, Arkansas; Lorna and George Williams of Des Moines, Washington; Corina and Martin Williams of Tacoma, Washington; and Sonja and Archie Leal of Maple Valley, Washington; one grandson and granddaughter-in-law, Forrest and Juliana Jessing of Fayetteville; their daughter, his great-granddaughter, Luna Jessing; and one sister, Shirley Dunlap of North Plains, Oregon; along with many nieces and nephews. He loved the Lord and positively influenced many people throughout his life and will be greatly missed. Memorial services will be held at a later date in Arkansas and Washington. Cremation is entrusted to Brashears Funeral Home and Crematory of Huntsville, Arkansas.

Paul Harry Jessing, 84 (though he would only admit to an age of 29), recently of Fayetteville, Arkansas; moved on to his heavenly home on Monday, April 13, 2020. Paul was born in Portland, Oregon; to Paul and Bertha Andos Jessing. Paul served... View Obituary & Service Information

The family of Paul Jessing created this Life Tributes page to make it easy to share your memories.

Paul Harry Jessing, 84 (though he would only admit to an age...

Send flowers to the Jessing family.