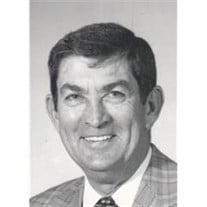 Norman Essie Taylor, 91, at Springdale, Arkansas died September 22, 2013 at the Circle of Life Hospice at Springdale. He was born November 29, 1921 at Wharton, Arkansas the son of Isaac Fletcher and Minnie Mae Burk Taylor. He retired from the U, S. Department of Agriculture after thirty-three years of service where he was an inspector of fruits and vegetables in many states and Mexico. He was a vetern of World War Two serving in the United States Navy as a gunner's mate aboard the destroyer U.S.S. Greer from 1942 to 1945. He was an over fifty year member of Huntsville Lodge #364, Free and Accepted Masons, a 32nd degree Mason and a member of Shiloh Methodist Church. He was preceded in death by his wife, Viola Elzey Taylor, whom he married on June 5, 1945 in Washington D.C. and died on August 2, 2009; one son John Byron Taylor who died March 22, 1986, four brothers, Arthur Taylor, Harold Taylor, Fay Taylor and Eugene Ttaylor and three sisters, Vera Dotson, Clarice Faubus and Josephine Jewell. Survivors include: one sister, Geraldine Goyne of Huntsville, Arkansas; one nephew, who was raised as his brother, Loren Lee Taylor of Kennewick, Washington and many nephews, nieces and other relatives. Graveside services will be held at 11:00 A. M. Thursday, September 26 at Fort Gibson National Cemetery, 1423 Cemetery Road, Fort Gibson, Oklahoma with Chaplain Forrest Kirk officiating. Pallbearers will be nephews. Arrangements are under the direction of Brashears Funeral Home www.brashearsfuneralhome.net at Huntsville. Visitation will be 6:00 to 8:00 P. M. on Wednesday at the funeral home with the family present. Memorials may be made to Cicle of Life Hospice, 901 Jones Road, Springdale, Arkansas 72762.

Norman Essie Taylor, 91, at Springdale, Arkansas died September 22, 2013 at the Circle of Life Hospice at Springdale. He was born November 29, 1921 at Wharton, Arkansas the son of Isaac Fletcher and Minnie Mae Burk Taylor. He retired from the... View Obituary & Service Information

The family of Norman Essie Taylor created this Life Tributes page to make it easy to share your memories.

Send flowers to the Taylor family.