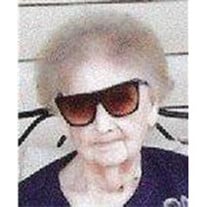 Nola Dean Huffar, 90, of Pettigrew, Arkansas, died May 28, 2011 at the Washington Regional Medical Center in Fayetteville, Arkansas. She was born July 16, 1920 at Pettigrew, Arkansas, the daughter of Simon and Clara Cook Watson. She was a homemaker, a member of the Church of Christ and the widow of Hallie Elmer Huffar who preceded her in death on September 6, 1985. She was also preceded in death by two sisters, Wilma June Karr and Rena Madeline Walden. Survivors include: one brother, Bobby Watson of Fayetteville, Arkansas; two sisters, Ola Jean Gray of Pettigrew, Arkansas and Mary Lee Johnson of Bentonville, Arkansas and several nephews and nieces. Graveside services will be held at 10:00 A. M. Tuesday, May 31, at the Dutton Cemetery with T. J. Bennett, Minister officiating. Arrangements are under the direction of Brashears Funeral Home www.brashearsfuneralhome.net of Huntsville, Arkansas. Pallbearers will be: Jeff Eaton, Craig Williams, Daniel Engel, Kevin Johnson, Timmy Engel, Wayne Watson, Robert Smith and Stephon Johnson. The family will receive friends from 2:00 P. M. to 4:00 P. M. on Monday at the funeral home.

The family of Nola Dean Huffar created this Life Tributes page to make it easy to share your memories.

Send flowers to the Huffar family.