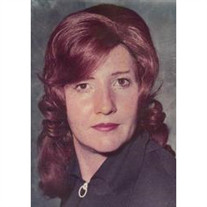 Mary Elizabeth Landrum, 69, of Huntsville, Arkansas, died September 26, 2011 at Meadowview Healthcare and Rehab in Huntsville, Arkansas. She was born April 9, 1942 at Osceola, Arkansas, the daughter of Leo Chester and Ideal Mae Moreland Burnett. She was a retired home health aide and a Christian. She was the widow of Jerry Don Landrum who preceded her in death in 1992. She was also preceded in death by one daughter, Hope Young in 2003, one sister, Mary June Hooper and her foster mother, Mary Elizabeth Davis. Survivors include: one son, Anthony Young of Holly Springs, North Carolina; one daughter and son-in-law, Tamara and Kevin Alan Goodman of Erwin, North Carolina; two brothers, Curtis Ray Burnett of Lawrence, Michigan and Chester Leo Burnett of Converse, Indiana; ten grandchildren; several great-grandchildren, nephews, nieces, great-nephews and great-nieces. Private interment will be in the Lebanon Cemetery at McRae, Arkansas. Cremation arrangements were under the direction of Brashears Funeral Home www.brashearsfuneralhome.net of Huntsville, Arkansas.

The family of Mary Elizabeth Landrum created this Life Tributes page to make it easy to share your memories.

Send flowers to the Landrum family.