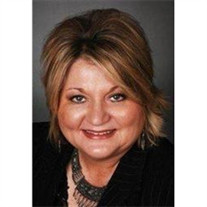 Linda Kay Rhodes, 57, of Farmington, Arkansas, died August 4, 2012 at the Washington Regional Medical Center in Fayetteville, Arkansas. She was born April 12, 1955 at Springdale, Arkansas, the daughter of Kenneth and Virginia Thomas Lee. She was a Christian serving as Children's Church Director and as a Sunday School Teacher for many years. She loved to go to Branson and attended Faith Life Church. She was a loving wife and mother and was a realtor for Lazenby Real Estate for many years. Survivors include: her husband, Garry T. Rhodes of the home whom she married on April 19, 1973; one son, The Reverend Dusty Rhodes of Farmington, Arkansas; her mother, Virginia Lee of Springdale, Arkansas; one brother and sister-in-law, David and Sandy Lee of Springdale, Arkansas; two nephews; one niece and a host of family and friends. Funeral services will be held at 2:00 P. M. Thursday, August 9, in the chapel of Brashears Funeral Home with The Reverends Gary Ledbetter and Eric Howerton officiating. Interment will be in the Bohannon Cemetery under the direction of Brashears Funeral Home www.brashearsfuneralhome.net of Huntsville, Arkansas. Pallbearers will be: Justin Lee, Zane Lee, Doug Howerton, Thomas Mitchell, Ward Harris and Tyson Stevens. Honorary pallbearers will be: Bill Lazenby, Larry Williams, Marvin Binam, Johnny Seals, Dearl Hull, Johnny Lee, Wayne Lee, Tommy Webb and LaVerl Day. The family will receive friends from 5:00 P. M. to 7:00 P. M. on Wednesday at the funeral home.

The family of Linda Kay Rhodes created this Life Tributes page to make it easy to share your memories.

Send flowers to the Rhodes family.