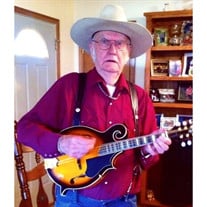 Johnnie Aaron Criss, Sr., , 93, of Huntsville; passed away Monday, January 10, 2022, at Edgewood Health and Rehabilitation Center in Springdale, Arkansas, surrounded by his loving family.  He was born on May 29, 1928 on Moonhull Mountain in Johnson County, Arkansas, a son and the youngest child of Steven A. Douglas Criss and Noma (Sparks) Criss. He married the love of his life, Rhoda Lorene Wood on September 2, 1954, at her parents' home in the Mt. Vernon Community of Johnson County by the Rev. Henson Williams. They were married for 37 years before she passed away on January 3, 1991.  He had family that called him Johnnie and family that called him Aaron, but to his children and grandchildren he was just called Daddy and Grandpa, and to his nephews and nieces, "Unc." He farmed most of his life but had also worked at sawmills. He loved going to flea markets and trading. In his younger years he loved coon hunting, He had lived most of the last 46 years in Madison County, moving from Johnson County, and had also lived in Newton County. He was of the Christian faith, being saved and baptized in the late 60's. He loved being social and never met a stranger. If he ever knew you, he never forgot you. His family was the light of his life. Johnnie was preceded in death by his parents; his wife Rhoda Lorene Criss; his brothers and sisters Lee Criss, Grover Criss, Bill Criss, Raymond Criss, Roy Criss, Mary Criss, Sarah Harderson, Rosie Cummins, Vellar Mooney, Minnie Wood and several siblings that died in infancy; sons-in-law David Edgmon and Bobby Hattabaugh and daughter-in-law Jona James. Survivors are his children Ricky Criss and Johnny Criss, Jr. both of Huntsville, Danny and Martha Criss of Wesley, Patsy Edgmon of Harrison, Judy and Randy Usrey of Clifty, Sherrie Hattabaugh of Hazel Valley and Tammy Criss of Wesley; 25 grandchildren, 63 great-grandchildren, 6 great-great grandchildren, one brother-in-law Norman Wood, one sister-in-law Linda Brandenburg, many nephews, nieces and other family and friends. The family will receive friends 5:00-7:00 PM, Thursday, January 13, 2022, at Brashears Funeral Home.  Funeral Services will be 12:00 noon, Friday, January 14, 2022, at Cassville Baptist Church. Deer, Arkansas, with Bobby Young officiating.  Pallbearers will be Erik Watson, Kyle Criss, Derek Thompson, Logan Hattabaugh, Gregory Chase, Tyler Usrey, Tom Usrey, Shannon Gibbins.  Honorary pallbearers will be grandsons and granddaughters.  Interment will immediately follow services at Cassville Cemetery.  Services are entrusted to Brashears Funeral Home and Crematory of Huntsville.

Johnnie Aaron Criss, Sr., , 93, of Huntsville; passed away Monday, January 10, 2022, at Edgewood Health and Rehabilitation Center in Springdale, Arkansas, surrounded by his loving family.  He was born on May 29, 1928 on Moonhull Mountain in... View Obituary & Service Information

The family of Johnnie Criss, Sr. created this Life Tributes page to make it easy to share your memories.