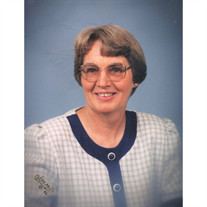 Jo Ann Gross, 85, of Huntsville; died Monday, April 19, 2021, at Countryside Assisted Living, Huntsville. She was born Friday, February 7, 1936, at Texana, Texas; to James Joseph and Margie Inez Phillips Givens. Jo Ann married Herbert Ruben Gross on Sunday, May 1, 1955 at Brookshire, Texas; and together they were parents to two children. She was a homemaker and a member of the Huntsville United Methodist Church. Jo Ann was a loving wife and mother. She was married to Herbert for 63 years, and enjoyed helping him on their farm. Jo Ann was preceded in death by her husband, Herbert; her parents, and one brother, James W. Givens. She is survived by her two daughters and sons-in-law, Jo Lynne and Mark Nelson of Huntsville; and Deborah and John Mathis of Little Rock; two grandchildren, Weston Nelson of Lowell; and Zachary Nelson of Middleton, Wisconsin; and one sister, Mary Frances McGhee of Overland Park, Kansas. Funeral Services will be 10:00 AM, Friday, April 30, 2021, at Big Sandy Cemetery with Brad Moore officiating. In lieu of flowers, memorial donations in Jo Ann's name can be made to Huntsville Kiwanis Children's Christmas Shopping Fund, PO Box 506, Huntsville, Arkansas 72740; or Huntsville United Methodist Church, PO Box 1257, Huntsville, Arkansas 72740. Services are entrusted to Brashears Funeral Home and Crematory of Huntsville.

The family of Jo Ann Gross created this Life Tributes page to make it easy to share your memories.

Send flowers to the Gross family.