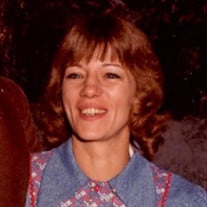 Janet Isabelle Stone, 68, of Huntsville; passed away Monday, February 7, 2022, at Circle of Life Hospice, Springdale. She was born Friday, July 10, 1953, at Staten Island, New York; to Sidney and Myra Davidson Stagman. Janet married David Stone on Friday, March 5, 1971 at Phoenix, Arizona; and together they were parents to two children. A homemaker, she loved gardening, making crafts, and watching her fish in her aquariums. There was never a day that Janet wasn't there for others. She would cook, help, and take care of the people she loved. She loved her family dearly and made a point of becoming a friend to everyone. Janet was preceded in death by her parents; her brother, Steven, and her sister, Judy. She is survived by her husband, David Stone of the home; one son and daughter-in-law, Glenn and Elizabeth Stone of Huntsville; one daughter and son-in-law, Renee and Chase Kendrick, of Hindsville; three sisters and one son-in-law, Ann and Jon Brass of Brooklyn, New York; Nora Enis-Patrone of New Jersey; and Joann Davidson of Huntsville; five grandchildren, and eight great-grandchildren. The family will host a celebration of life will be held at 12:30 PM, Friday, February 11, 2022, at the Assembly of God Church Gymnasium with Gary Martin officiating. Cremation is entrusted to Brashears Funeral Home and Crematory of Huntsville.

The family of Janet Stone created this Life Tributes page to make it easy to share your memories.

Send flowers to the Stone family.