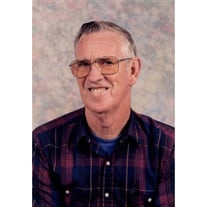 Hayden Boyd Eubanks, 88, of Huntsville; went home to be with the Lord, Tuesday, February 9, 2021, at Washington Regional Medical Center, Fayetteville.  He was born Wednesday, June 8, 1932, at Asher; to Johnnie Francis and Hattie Pearl Glenn Eubanks.Hayden, and his sweetheart, Reva Inez Davis, were married on Wednesday, February 18, 1953 at Georgetown, by Inez's grandfather, Brenner Davis.  Together, they were parents to three daughters, Sendra, Barbara, and Sue; and two sons, Jimmy and Jerry.  Hayden was proud to have served his country in the United States Navy, having served during the Korean War.  He retired after 22 years from Elkhart Products Corporation, to care for Inez.  He later returned to the workforce, working 8 years for Ozark Regional Transit before finally retiring.  He enjoyed spending time with his family, fishing, and boating.  He was a nature lover who enjoyed spending a lot of time outside on his mountain.  He was a long time member of the Mt. Grove Church of Christ where he served as an Elder.Hayden was preceded in death by his parents; his loving wife of 42 years, Inez; and their youngest son, Jerry Wayne Eubanks  He is survived by one son and daughter-in-law, Jimmy and Marsha Eubanks of Japton; three daughters and two sons-in-law, Sendra and Ronald French of Fayetteville; Barbara and David Fowler of Wesley; and Sue Miller of Huntsville.  He is also survived by five grandsons, Justin French, Jason French, Jimmy Eubanks, Jr., Johnathon Eubanks, Josh Frazier, and six granddaughters, Jennifer Fowler, Amanda Fowler, Kerrie Cline, Susan Willis, Crystal Eubanks, and Jordan Hollingsworth; and 27 great-grandchildren, all of whom he loved and was so proud of. Funeral Services will be 2:00 PM, Saturday, February 13, 2021, at Brashears Funeral Home with Jimmy Eubanks officiating.  Due to COVID-19, please practice social distancing and masks are required.  Pallbearers will be Jimmy Eubanks, Jennifer Fowler, Steve Tackett, Erik Rivas, Jonathan Eubanks, Kerrie Cline, Jeff Cline, Carlos Rivas.  Honorary pallbearers will be Justin French, Amanda Fowler, Susan Willis, Josh Frazier, Jason French, Crystal Eubanks, Jordan Hollingsworth, and Ellie Walden.  Interment will immediately follow services at Drakes Creek Cemetery.  Services are entrusted to Brashears Funeral Home and Crematory of Huntsville.

The family of Hayden Eubanks created this Life Tributes page to make it easy to share your memories.

Hayden Boyd Eubanks, 88, of Huntsville; went home to be with...

Send flowers to the Eubanks family.