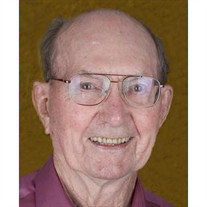 Ewell Parson, 92, of Huntsville, Arkansas, died September 3, 2015 at his home. He was born October 6, 1922 at Loy, Arkansas, the son of Ray W. and Eliza Whorton Parson. He was known by the nickname "Hooker" which was given to him as a boy by his father. He was a veteran of World War Two, serving in the United States Army in Europe where he earned five battle stars and was awarded the Purple Heart. Late in his life, he visited the World War Two Memorial as a part of a Northwest Arkansas Honor Flight. He retired in 1984 after thirty years of service with the Agriculture Stabilization and Conservation Service in Madison County. He was a member of Faith South Baptist Church in Huntsville and sang in the Huntsville Community Choir for over thirty years. He was a sixty-three year member of Hayes-Smith Post #137, American Legion and a former member of the Huntsville Lions Club and helped to organization the first Youth Baseball Program in Huntsville. He loved to sing and over the years had sung at many funerals. He also enjoyed fishing, quail, pheasant and mushroom hunting and planting his garden. He was preceded in death by his wife of fifty-eight years, Narene Seals Parson, whom he married on November 10, 1945 and who preceded him in death on July 20, 2004. He was also preceded in death by one son-in-law, Earl Williston on November 10, 2013; seven brothers, Earnest William Parson, Carl Parson, Herbert Glen Parson, Garland Joseph Parson, Hugh Francis Parson and Quinton Parson and one sister, Irene Easterling. Survivors include: two daughters and one son-in-law, Janice Williston of Owasso, Oklahoma and Deborah "Debbie" and Lee Holt of Huntsville, Arkansas; three grandsons and granddaughters-in-law, Bret and Stacey Williston of Ramona, Oklahoma, Greg and Katie Williston of Collinsville, Oklahoma and Dr. Jason and Kim Holt of Fayetteville, Arkansas; one granddaughter and grandson-in-law, Lori and Chris Wylie of Huntsville, Arkansas and five great-grandchildren, Payton Wylie, Cori Wylie, Hayden Holt, Mackenzie Holt and Cash Williston. Funeral services will be held at 1:00 P. M. Tuesday, September 8, in the chapel of Brashears Funeral Home with Dr. Jason Holt, Eulogist and The Reverend Alex Martin officiating. Interment will be in the Aurora Cemetery under the direction of Brashears Funeral Home www.brashearsfuneralhome.net of Huntsville, Arkansas. Pallbearers will be: Lee Holt, Chris Wylie, Brett Williston, Greg Williston, Dr. Jason Holt and Payton Wylie. Memorials may be made to The First Presbyterian Church Building Fund, Post Office Box 603, Huntsville, Arkansas or The Huntsville Friendship Club Memorial Fund, Post Office Box 762, Huntsville, Arkansas 72740-0762.

Ewell Parson, 92, of Huntsville, Arkansas, died September 3, 2015 at his home. He was born October 6, 1922 at Loy, Arkansas, the son of Ray W. and Eliza Whorton Parson. He was known by the nickname "Hooker" which was given to him as a boy by... View Obituary & Service Information

The family of Ewell Parson created this Life Tributes page to make it easy to share your memories.

Send flowers to the Parson family.