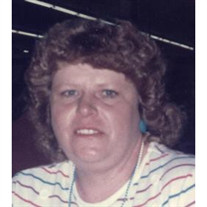 Evelyn Sue Dotson, 66, of Springdale, Arkansas, died May 11, 2015 at Regency Hospital in Springdale, Arkansas. She was born September 30, 1948 at Eureka Springs, Arkansas, the daughter of Clifford Emerson and Gracie Beatrice Couey Shrum. She was a former employee of Welch's Foods and Rainbow Cleaners, both of Springdale. She was the Assistant Pastor of Freedom Full Gospel Church and the wife of the Deacon. She was preceded in death by one son, Jason Delbert Dotson who preceded her in death on October 10, 1999. She was also preceded in death by three brothers, Jim Pence, Gary Shrum and Keith Shrum. Survivors include: her husband, Dale Dotson of the home; one brother, Jack Shrum of Chanute, Kansas and one sister, Linda Williams of Rogers, Arkansas. Funeral Services will be held at 10:00 A. M. Saturday, May 16, in the chapel of Brashears Funeral Home with The Reverend James Howell and Jeff Nefferton officiating. Interment will be in the Bluff Cemetery at Springdale under the direction of Brashears Funeral Home www.brashearsfuneralhome.net of Huntsville, Arkansas. Pallbearers will be: Chase Scallorn, Jackson Smith, Rickey Williams, Luke Trowbridge, Devin Karr and Tyler Williams. Honorary pallbearers will be: Billy Williams, Greg Smith, Larry Easterling and Bobby Dotson. The family will receive friends from 5:00 P. M. to 7:00 P. M. on Friday at the funeral home.

The family of Evelyn Sue Dotson created this Life Tributes page to make it easy to share your memories.

Send flowers to the Dotson family.