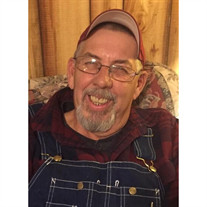 David Baker, 72, of Fayetteville; died Saturday, June 19, 2021, at Willard Walker Hospice, Fayetteville. He was born Sunday, June 18, 1949, at Fayetteville; to Edward and Ina Fraley Baker. David married Connie McCoy on December 26, 1980 at Huntsville. He loved camping and he and Connie were members of a camping club. One of his favorite pastimes was to serenade the group with opera singing, or at least he tried to, even though he couldn't sing. He loved to go to auctions and buy what most people would call "junk," he brought it home and called it "yard art." He was also known for his sayings like "If you don't work, you don't eat." David was preceded in death by his father and an infant brother, Paul. He is survived by his mother, Ina Baker; his wife, Connie; two children, Larry Baker and wife Ashlyne, of Derby, Kansas; and Darla Hoffpaur and husband John, of Humble, Texas; and two grandchildren, Alisha Cooper and husband Mike, of Rose Hill, Kansas, and Mylan Baker of Derby, Kansas. There will be a visitation on June 22, 2021; from 5:00-7:00 PM at Brashears Funeral Home.  Graveside services will be held 10:30 AM, Wednesday, June 23, at Hazel Valley Cemetery with Steve Sullivan officiating. Pallbearers will be Ronnie McCoy, Jeff McCoy, Phil McCoy, Gene Boatright, David Dickerson and Josh Auslam.  Services are entrusted to Brashears Funeral Home and Crematory of Huntsville.

The family of David Allen Baker created this Life Tributes page to make it easy to share your memories.

Send flowers to the Baker family.