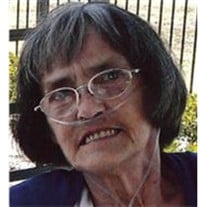 Barbara Jean Simpson, 75, of Forum, Arkansas, died August 11, 2012 at the Washington Regional Medical Center in Fayetteville, Arkansas. She was born February 1, 1937 at Forum, Arkansas, the daughter of Densel and Nettie Marshall Vanhook. She was retired from the Pulaski County Special School District in Little Rock, Arkansas, where she worked as a cafeteria manager. She was a member of the Forum Church of Christ and a board member of the Marshall Cemetery where she served as secretary. She enjoyed watching the birds from her kitchen table and also enjoyed quilting and embroidering. She loved spending time with her family and friends. One of her greatest pleasures was cooking for her family and friends becasue there was no greater joy than having them sitting around her table and eating and reminiscing and making new memories. She was preceded in death by her husbands, Joe Wayne Simpson and Arnold "Fred" Larson, her parents, two brothers, Doyle Vanhook and Lindell "Pete" Vanhook and one grandson, Jeremy Wayne Penix. Survivors include: one son, Kendell Simpson of the home; two daughters and one son-in-law, Denise Knoff of the home and Deanna and John Hardin of Maumelle, Arkansas; two brothers, Carol Vanhook of Kamas, Utah and Frankie Earl Vanhook of Forum, Arkansas; two sisters-in-law, Jean Vanhook and Annette Vanhook, both of Forum, Arkansas; five grandchildren, Danielle Gatlin, Nathan Hardin, Jessica Hardin, Morgan Hardin and Bryce Simpson and three great-grandchildren, James "Hayden" Pate, Bradley Brown and Cruz Hardin. Funeral services will be held at 10:00 A. M. Wednesday, August 15, in the chapel of Brashears Funeral Home with Robert Waters and Gary Smith, Ministers officiating. Interment will be in the Marshall Cemetery at Forum, Arkansas under the direction of Brashears Funeral Home www.brashearsfuneralhome.net of Huntsville, Arkansas. Pallbearers will be: David Vanhook, Brian Vanhook, Rob Vanhook, Jason Vanhook, Anthony Simpson and Eric Simpson. Honorary pallbearers will be: Nathan Hardin, Nick Rappold, Bryce Simpson, James "Hayden" Pate, Bradley Brown, Cruz Hardin, Gary Vanhook, Lyn Falkner, Floy Bob Cartmell, Greg Simpson, Clay Simpson, Todd Easterling and Jason Phillips. The family will receive friends at their home on Tuesday, August 14, from 6:00 P. M. to 9:00 P. M. Memorial may be made to the Marshall Cemetery, 6848 Madison 8500, Huntsville, Arkansas 72740.

The family of Barbara Jean Simpson created this Life Tributes page to make it easy to share your memories.

Send flowers to the Simpson family.