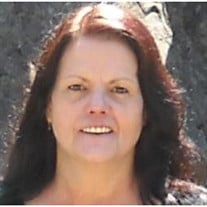 Audrey Ann Marshall, 55, of Huntsville, Arkansas, died June 11, 2017 at her home.  She was born December 18, 1961 at Rapid City, South Dakota, the daughter of Clarence and Edrekka Somervold Roberts.  She was a former field inspector for the... View Obituary & Service Information

The family of Audrey Ann Marshall created this Life Tributes page to make it easy to share your memories.