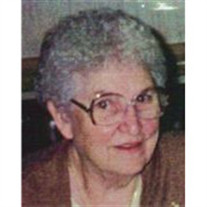 Wilma Faye Clark, 89, of Huntsville, Arkansas, died November 24, 2010 at the Washington Regional Medical Center Hospice in Fayetteville, Arkansas. She was born September 24, 1921 at Russellville, Arkansas, the daughter of Walter and Mary Pigg Duvall. She was a homemaker and a member of the Huntsville Free Will Baptist Church. She was preceded in death by her first husband, one son, Paul Wayne Clark, her parents and ten brothers and sisters. Survivors include: her husband, Jonah Clark of the home whom she married on January 15, 1949; two sons and one daughter-in-law, Leon and Dawn Clark of Hindsville, Arkansas and Stephen Clark of Huntsville, Arkansas; two sisters, Leola Graves of Atkins, Arkansas and Marie Burris of Russellville, Arkansas; three granddaughters and five great-grandchiildren. Funeral services will be held at 10:30 A. M. Tuesday, November 30, in the chapel of Brashears Funeral Home with The Reverend Jim Spurlock officiating. Interment will be in the Huntsville Cemetery under the direction of Brashears Funeral Home www.brashearsfuneralhome.net of Huntsville, Arkansas. Pallbearers will be: Keith Phillips, Mike Grigg, Greg Maggard, Jim Martin, Dane Duvall, Shannon Sales, David Duvall and Leon Henderson. The family will receive friends from 6:00 P. M. to 7:00 P. M. on Monday at the funeral home. Memorials may be made to Feed the Children Foundation, Post Office Box 36, Oklahoma City, Oklahoma 73101.

The family of Wilma Faye Clark created this Life Tributes page to make it easy to share your memories.

Send flowers to the Clark family.