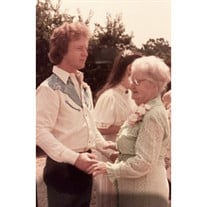 Our brother, our cowboy, Anthony (Tony) Den Marshall, 69, of Haslet, Texas, departed this life January 9, 2022. He was born to Bryce M. and Barbara L. (Montgomery) Marshall in Oklahoma City, on December 20, 1952.Tony had lived for more than a decade in Texas but spent most of his life in our Arkansas hills where he loved fishing lakes and streams and riding highways and backroads on his motorcycle. And, man, could he ride a motorcycle, on dirt or doing 70 mph wheelies on highway. Tony was a rider with different reflexes and balance shared by only a few. Some of his happiest times were using those natural traits in his youth rodeoing. He could sit a bull or bronc as well as any other cowboy coming out of the chutes. He was a natural and bucked the same bulls as a fellow rider who later became national champion. In his later years, he was more into following Cowboys and Hogs on television. Tony lived a rough life and had some difficult times but was forever cowboy tough and loved his family.Tony was preceded in death by his grandparents, Maude and David Marshall and Anna and Den Montgomery, his mom, dad, and baby brother, Jeff. Tony left behind three brothers and two sisters-in-law to treasure his memory: Bryce and Diane Marshall of Greenwood, Dan Marshall of Ft. Worth, Texas, and Kerry and Terri Marshall of War Eagle. Also, left behind are nephews, David Graham, Dustin Sanders, and Jonathan Marshall, and grand-nephews, Joshua Graham and Gabriel Marshall.Funeral services will be 2:00 PM, Thursday, January 20, 2022, at Brashears Funeral Home with Larry Montgomery officiating. Pallbearers will be Bryce Marshall, Dan Marshall, Kerry Marshall, and Mike Montgomery. Honorary pallbearers will be Bryce Wayne Marshall, Dustin Sanders, Jonathan Bryce Marshall, and David Graham. Interment will immediately follow services at Marshall Cemetery. Services are entrusted to Brashears Funeral Home and Crematory of Huntsville.1952

Our brother, our cowboy, Anthony (Tony) Den Marshall, 69, of Haslet, Texas, departed this life January 9, 2022. He was born to Bryce M. and Barbara L. (Montgomery) Marshall in Oklahoma City, on December 20, 1952.Tony had lived for more than... View Obituary & Service Information

The family of Tony Marshall created this Life Tributes page to make it easy to share your memories.