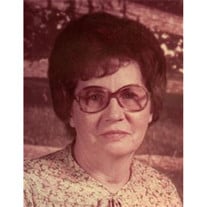 Ruby Pauline Whorton, 94, of Springdale, Arkansas, died January 29, 2015 at Walnut Grove Nursing and Rehab Center in Springdale, Arkansas. She was born December 10, 1920 at Boston, Arkansas, the daughter of Willard and Annie McFee Carpenter. She was a cook and the widow of Arthur Virgil Whorton who preceded her in death on October 25, 1984. She was also preceded in death by one son, Ronnie Dean Whorton on October 16, 2009, two brothers, Cecil Carpenter and Charlie Carpenter and two sisters, Bertha Lyman and Dovie Carpenter. Survivors include: one son and daughter-in-law, Rick and Teresa Whorton of Springdale, Arkansas; one grandson, Chase Whorton of Springdale, Arkansas; one granddaughter, Corie Whorton of Sedalia, Missouri and one sister, Sarah Carpenter of Tulsa, Oklahoma. Funeral services will be held at 2:00 P. M. Monday, February 2, in the chapel of Brashears Funeral Home with The Reverend Larry Carpenter and Earl Lyman officiating. Interment will be in the Huntsville Cemetery under the direction of Brashears Funeral Home www.brashearsfuneralhome.net of Huntsville, Arkansas. Pallbearers will be: Joe Lyman, Brent Tisdale, Troy Thompson, Rick Fox, Chase Whorton and Rick Whorton. The family will receive friends from 6:00 P. M. to 8:00 P. M. on Sunday at the funeral home.

The family of Ruby Pauline Whorton created this Life Tributes page to make it easy to share your memories.

Send flowers to the Whorton family.