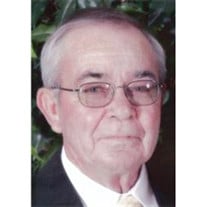 Roy I. Cain, 78, of Huntsville, Arkansas, went to be with the Lord, Sunday, May 27, 2012 at the Veterans Healthcare System of the Ozarks in Fayetteville, Arkansas. He was born November 11, 1933 at Kingston, Arkansas, the son of Mack and Elsie Hawthorn Cain. He loved the Lord and lived for Him in everything he did as a wonderful Husband, Father, Grandfather and Great-grandfather; Pastor for thirty-five years, Auctioneer for forty plus year and Businessman. Roy was a veteran of the Korean War, serving in the United States Army and a very envolved member of the community. He loved to be with all those in the community and his church. He used his love of people to minister each and every day and was always there with a word of hope, humor or story to bring a smile. Roy, "Dad", "Papa" and "Pa", as he is referred to by his family, was a strong, kind, extraordinary man who loved his family very much. Survivors include: his loving wife of fifty-seven years, Mary Lou Yancey Cain of the home; one daughter and son-in-law, Latisha and Joe Parsley of Rogers, Arkansas; one son and daughter-in-law, Rod and Sondra Cain of Huntsville, Arkansas; two brothers, Charles Cain of Pendleton, Oregon and Bill Cain of Athena, Oregon; three sisters, Thelma Garton of Milton-Freewater, Oregon, Joetta Bowen of Springdale, Arkansas and Shirley Clark of Dry Creek, Illinois; six grandchildren and four great-grandchildren. Funeral services will be held at 10:00 A. M. Wednesday, May 30, in the chapel of Brashears Funeral Home with The Reverend Brandon Brasel officiating. Interment will be in the Lower Campground Cemetery under the direction of Brashears Funeral Home www.brashearsfuneralhome.net of Huntsville, Arkansas. Pallbearers will be: Nicky Peyrot, Tyler Trumbo, Ron Stevens, Travis Parsley, Ryan Schatz and Bryan Lauderdale. Honorary pallbearers will be: Hayden Cain, Phil Thompson, Herb Hathorn, Bill Cain, Charles Cain, Kenneth Cornett and J. D. Hawthorn. The family will receive friends from 6:00 P. M. to 8:00 P. M. on Tuesday at the funeral Home. In lieu of flowers, the family has asked that memorials be made to Calvary Baptist Church Building Fund, Post Office Box 1019, Huntsville, Arkansas 72740.

Roy I. Cain, 78, of Huntsville, Arkansas, went to be with the Lord, Sunday, May 27, 2012 at the Veterans Healthcare System of the Ozarks in Fayetteville, Arkansas. He was born November 11, 1933 at Kingston, Arkansas, the son of Mack and Elsie... View Obituary & Service Information

The family of Roy I. Cain created this Life Tributes page to make it easy to share your memories.

Send flowers to the Cain family.