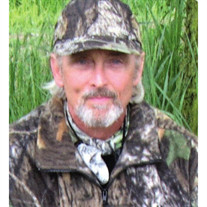 Dr. Ronald Earl McGaughey, II, 65, of Elkins, passed away October 26, 2018, at Fayetteville.  He was born November 6, 1952 in Tyler Town, Mississippi; to Ronald and Elizabeth McGaughey.  Ron received his BSBA, in Industrial Management, and MBA, in Management, from the University of Southern Mississippi; his BA, in Computer Science, from LaGrange College; and his PhD, in Management Information Systems, from Auburn. Ron served as a professor at Arkansas Tech University, in Russellville, from 1992-2001; and recently retired from the University of Central Arkansas, in Conway, where he had been a professor since August of 2001.  He was a member of the First Baptist Church in Russellville; and First Baptist Church of Fayetteville. Ron's other passion in life, beyond education, was turkey hunting.  He grew up in rural Mississippi and started turkey hunting at the age of twelve.  He loved traveling and hunting with his friends.  He authored a book on the subject in 2011, sharing his passion and knowledge of the sport.  He said "Perhaps there is something about the man that makes him a turkey hunter, or there is something that turkey hunting contributes to making the man." Ron was predeceased by one sister, Debbie Varner.  He is survived by one son, Ray McGaughey; one sister, Susan Laurie; three nieces, Melissa Martin-French, Jamie Swan, and Ashley Sanchez; one nephew, Jeremy Lesso; and great-nephew, Caleb Lesso. A celebration of life service will be held at a later date.  In lieu of flowers, the family requests that donations be made to create a scholarship fund for students to attend the IT Career Camp at UCA. Donations may be made in memory of Dr. Ronnie McGauhey online by visiting www.uca.edu/give or by mailing a check to the UCA Foundation, located at 201 Donaghey Avenue, Conway, AR 72032 and denoting the IT Careers Center Fund in the memo line.  Services are entrusted to Brashears Funeral Home and Crematory of Huntsville.

The family of Ron McGaughey created this Life Tributes page to make it easy to share your memories.

Send flowers to the McGaughey family.