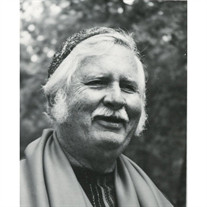 The Reverend Richard James Ludig of Eureka Springs, Arkansas, died March 20, 2019 at the age of ninety-one. Pastor, teacher, evangelist, steadfast husband, and loving father, he was born 1927 in Indianapolis, Indiana, to Jack and Genevieve Currie Ludig. He joined the U.S. Navy in 1945 and retired as Chief Petty Officer after twenty-one years service during World War II, the Korean Conflict, and Vietnam War. Ordained as a minister in the Independent Christian Churches in 1972, he served congregations in Oklahoma, Kansas, Tennessee, and Arkansas. He retired in 1993 after thirteen years as Pastor of First Christian Church of Eureka Springs. He traveled widely across the U.S. with his First-Person Ministries, teaching in the personas of multiple Bible figures. Noted for his deep and resounding voice, singing was always an important part of his ministry. From 1993 until shortly before his death, he taught as a Priest of the Tabernacle in the New Holy Land at the Great Passion Play in Eureka Springs. Born of Jewish heritage, he brought an historical viewpoint to his Tabernacle ministry; as a believer in Jesus Christ as the Messiah, he brought the perspective of Christian fulfillment. At the time of his death, he was a member of the Lone Star Bible Church in Eureka Springs. Pastor Ludig is survived by his wife of over sixty-six years, Joan Cecilia Ludig of Eureka Springs, their son David Ludig of Hermann, Missouri, their daughter Sandra Ludig Brooke of San Marino, California, three granddaughters, and two great granddaughters. In lieu of flowers, the family invites donations to the Great Passion Play directed towards Tabernacle upkeep. Services will be at the Lone Star Bible Church in Eureka Springs, Arkansas beginning with visitation at 9:00 AM and Services at 10:00 AM with Pastor Don Carter officiating. Interment immediately following at the Eureka Springs Cemetery.  Services are entrusted to Brashears Funeral Home and Crematory of Huntsville

The family of Richard James Ludig created this Life Tributes page to make it easy to share your memories.

Send flowers to the Ludig family.