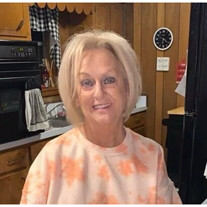 Linda "Penny" Louise Gaskill, 75, of Huntsville; passed away Saturday, December 11, 2021, at Circle of Life Hospice, Springdale. She was born Tuesday, December 3, 1946, at Huntsville; to Hoyt Overton and Arla M. Ham McLoud. Penny married Robert Lee Gaskill on Monday, December 4,1967 at Huntsville, Arkansas; and together they were parents to two children. She worked at many community businesses including the Madison County Courthouse and Huntsville Memorial Hospital, but the majority of her working years were at First National Bank of Huntsville which later became Arvest. She retired from Arvest as a mortgage loan officer. She was an active member of Kiwanis for many years and was a lifelong member of Presley Chapel United Methodist Church. She was an avid fan of Razorback football, basketball, and baseball, as well as the St. Louis Cardinals and Dallas Cowboys. But her favorite team or sport to watch was whatever Remington and Madison were involved in. She was their biggest, and often loudest, fan. Penny was preceded in death by her parents; her husband, Robert; her son, Timothy John Gaskill; and two brothers, Howard Overton McLoud and Billy Hoyt McLoud She is survived by her daughter, Sherri Cozad of Huntsville; two grandchildren, Remington Cozad of Springfield, Missouri; and Madison Cozad of Huntsville; three sisters, Roberta Prouty of Huntsville, Kay Jones of Fayetteville, and Sharon Calvert of Huntsville; and many other loved family members and friends. She will lie in state 8:00 AM to 7:00 PM, Wednesday, December 15, 2021, at Brashears Funeral Home.  Private graveside memorial services will be Thursday, December 16, 2021, at Alabam Cemetery with Ryan Bachuss officiating. Although Penny requested a private service, please celebrate her life by wearing any of her favorite teams' logos on Thursday In lieu of flowers, donations can be made to Circle of Life Hospice, 901 Jones Road, Springdale, AR 72762; or Presley Chapel United Methodist Church 36872 Highway 23, Huntsville, AR 72740. Services are entrusted to Brashears Funeral Home and Crematory of Huntsville.

The family of Penny Gaskill created this Life Tributes page to make it easy to share your memories.

Send flowers to the Gaskill family.