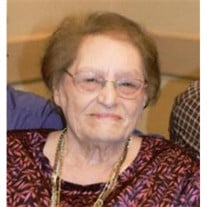 Patricia Ann Marshall, 80, of Forum, Arkansas, died January 23, 2016 at the Washington Regional Medical Center in Fayetteville, Arkansas. She was born May 27, 1935 at Wichita, Kansas, the daughter of Wendell Wallace and Florence Lorraine Gilchrist Tyson. She had retired from Butterball Turkey Company and was a member of the Forum Church of Christ. She was the widow of James Thomas Marshall who preceded her in death on December 6, 2006. She was also preceded in death by one son, Micah Marshall, one son-in-law, Richard Lyman, two brothers, David Tyson and Cecil Brown and one sister, Alberta Hill. Survivors include: two sons and daughters-in-law, James Thomas Marshall, Jr. and Audrey Marshall and Terry and Tammy Marshall, all of Forum, Arkansas; three daughters and one son-in-law, Sheryl Harvey of Forum, Arkansas, Carol Lyman of Huntsville, Arkansas and Geri and Randy Harner of Springdale, Arkansas; one brother, Tommy Brown of Wichita, Kansas; two sisters, Delores Mick of Rogers, Arkansas and Marilyn Ryder of Greenville, Ohio; seventeen grandchildren; twenty-five great-grandchildren and five great-great-grandchildren. Funeral services will be held at 10:00 A. M. Thursday, January 28, in the chapel of Brashears Funeral Home with Robert Waters and Ivy Conner, Ministers officiating. Interment will be in the Marshall Cemetery at Forum under the direction of Brashears Funeral Home www.brashearsfuneralhome.net of Huntsville, Arkansas. Pallbearers will be: Johnny Watkins, Connie Lyman, Dwain McLoud, Paul Raymer, Dale Grigg, Randy Harner and John Paul Swearengin. The family will receive friends from 5:00 P. M. to 7:00 P. M. on Wednesday at the funeral home.

The family of Patricia Ann Marshall created this Life Tributes page to make it easy to share your memories.