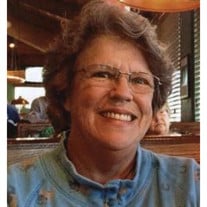 Pamela LeVeque Brink, 69, of Japton, Arkansas, died November 25, 2015 at the Willard Walker Hospice Home in Fayetteville, Arkansas. She was born July 22, 1946 at Virginia, Minnesota, the daughter of H. William and Barbara LeVeque Gillespie. She was a graduate of Saint Mary's Hall in Faribault, Minnesota, a homemaker and a retired farmer. She was a member of the Mountain Grove Church of Christ, a past president and board member of the Madison County Farm Bureau, a member of the Arkansas Farm Bureau Women's Committee, a board member, firefighter and first responder of the Japton Volunteer Fire Department, a team leader and member of Madison County Search and Rescue and a life member of Huntsville Chapter #487, The Order of the Eastern Star. She was the widow of Richard Wayne Brink, whom she married on June 15, 1967 and who preceded her in death on March 23, 1994. Survivors include: two daughters and sons-in-law, Becky and Brett Crumley of Huntsville, Arkansas and Beth and Leo Vidal of Angora, Minnesota; one brother and sister-in-law, Grover and Diana Gillespie of Orr, Minnesota; four grandchildren, Taylor Crumley and Cade Crumley, both of Huntsville, Arkansas and Trinity Vidal and Tristan Vidal, both of Angora, Minnesota. A memorial service will be held at 10:00 A. M. Tuesday, December 1, in the chapel of Brashears Funeral Home with Jack Harriman, minister officiating. Private interment will be in the McCord Cemetery at Elkins under the direction of Brashears Funeral Home www.brashearsfuneralhome.net of Huntsville, Arkansas.

The family of Pamela LeVeque Brink created this Life Tributes page to make it easy to share your memories.

Send flowers to the Brink family.