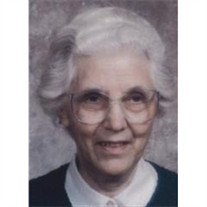 Nola Christine Harvey, 93, of Nob Hill, Arkansas, died July 2, 2013 at her home. She was born May 23, 1920 at George, Arkansas, the daughter of Ray and Ova Mae Newberry Smith. She was a homemaker and loving mother all of her life. She was a member of Pilgrim's Rest Free Will Baptist Church and the widow of Ervin Harvey who preceded her in death on February 1, 1991. She was also preceded in death by two sons, Marvin and Jerry, three infants, three brothers, Hubert James Smith, Charles Lee Smith and Ray Smith, Jr., and two sisters, Lovella Harvey and Doris Hester. Survivors include: three sons and four daughters-in-law, Chester and Kay Harvey of Eolia, Missouri, Lester and Nida Harvey and Gary and Kathy Harvey, all of Huntsville, Arkansas and Sandy Harvey of Springdale, Arkansas; two daughters and one son-in-law, Linda and Bob Holloway and Sharon Harvey of Huntsville, Arkansas; four brothers, Art Smith of Springdale, Arkansas, Boyd Smith of Green Forest, Arkansas, Joe Smith of Jenks, Oklahoma and Cecil Smith of Benton, Illinois; three sisters, Ruth Ball Boyd of Springdale, Arkansas, Mary Cobb of Harrison, Arkansas and Carmal McMahan of Shawnee, Oklahoma; fifteen grandchildren; forty-one great-grandchildren and several great-great-grandchildren. Funeral services will be held at 11:00 A. M. Friday, July 5, in the chapel of Brashears Funeral Home with Joe Smith, Eulogist and The Reverend Lowell Bradley officiating. Interment will be in the Captain Smith Cemetery at Witter under the direction of Brashears Funeral Home www.brashearsfuneralhome.net of Huntsville, Arkansas. Pallbearers will be: Brad Cavender, Jimmy Cutshall, Bobby Holloway, Bill Lindsay, Swain Harvey and Steve Ball. Visitation will be from 9:00 A.M. to 11:00 A.M. Friday at the funeral home. The family thanks the staff of Circle of Life Hospice and her caregiver, Sandy Harvey for their care and love. Memorials may be made to Circle of Life Hospice, 901 Jones Road, Springdale, Arkansas 72762.

Nola Christine Harvey, 93, of Nob Hill, Arkansas, died July 2, 2013 at her home. She was born May 23, 1920 at George, Arkansas, the daughter of Ray and Ova Mae Newberry Smith. She was a homemaker and loving mother all of her life. She was a... View Obituary & Service Information

The family of Nola Christine Harvey created this Life Tributes page to make it easy to share your memories.

Send flowers to the Harvey family.