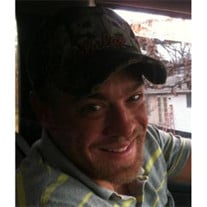 Michael Robert Carder, 31, of Wesley, Arkansas, died November 20, 2015 at Hindsville, Arkansas. He was born March 4, 1984 at Anaheim, California, the son of Kim and Mary Green Carder. He was a diesel mechanic and a Christian. Survivors include:... View Obituary & Service Information

The family of Michael Robert Carder created this Life Tributes page to make it easy to share your memories.

Send flowers to the Carder family.