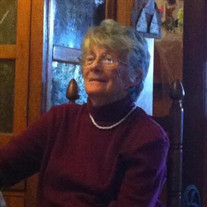 Margaret Maxine Holland Armes Boatright, 96, of Huntsville; passed away Friday, March 18, 2022, at Fayetteville. She was born Saturday, November 28, 1925, at Alabam; to Hugh Elmer and Elsie Mason Holland. Maxine married Dwight Bea Armes in July 1944. After Dwight's passing, she married Augustus Clifford Boatright on September 2, 1950. A mother of five, she was an excellent caregiver for her parents, siblings, children, and grandchildren. She was a hard worker and a helpmate to Gus; together, they raised chickens, cattle, horses, and always grew a large garden. Her hobbies included working in her flowerbeds, collecting rocks, spending time with her animals, and being around others. During her time as a youth group leader at the Farmer Church, she influenced many young people. She was also an active member in riding clubs and Extension Homemakers Club. Maxine was preceded in death by her husbands, Dwight Bea Armes and Augustus Clifford Boatright; her parents Hugh and Elsie Holland; one grandson, six siblings, and three nephews. She is survived by her two sons and one daughter-in-law, David Boatright, and Les and Tanya Boatright; three daughters and two sons-in-law; Kerry and Rob Boone; Janet and Lee Householder; and Cheryl McLoud; 9 grandchildren, Mike and Jennifer Samuels, Marty and Jennifer Samuels, Kevin and Connie Boatright, Aaron Haskins, Brad and Nicole Boone, Cody and Aubrey Boone, Cody and Robin McLoud, Lori Boatright, and Leigh Boatright; 21 great-grandchildren, and 8 great-great-grandchildren. The family will receive friends 5:00-7:00 PM, Monday, March 21, 2022, at Brashears Funeral Home. Graveside Service will be 2:00 PM, Tuesday, March 22, 2022, at Boatright Cemetery with Max Bowlin officiating. Services are entrusted to Brashears Funeral Home and Crematory of Huntsville.

The family of Maxine Boatright created this Life Tributes page to make it easy to share your memories.

Send flowers to the Boatright family.