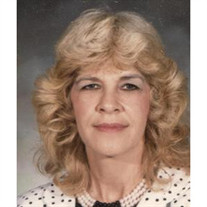 Mary Ann Barron, 76, of Huntsville, Arkansas, went to be with her Lord and Savior peacefully at her home after losing her battle with lung cancer, while attaining her crown of life as Jesus welcomed her home on December 12, 2015. She was born... View Obituary & Service Information

The family of Mary Ann Barron created this Life Tributes page to make it easy to share your memories.

Mary Ann Barron, 76, of Huntsville, Arkansas, went to be with...

Send flowers to the Barron family.