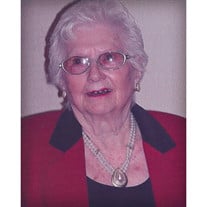 Marjorie Ann Sanders of Huntsville, passed from this earth on January 28, 2018 at the age of 93 at Willard Walker Hospice in Fayetteville.  She was born March 4, 1924 in Fairfax, OK; to Art and Texie Walworth.She is preceeded in death by her... View Obituary & Service Information

The family of Marjorie Ann Sanders created this Life Tributes page to make it easy to share your memories.

Marjorie Ann Sanders of Huntsville, passed from this earth on...

Send flowers to the Sanders family.