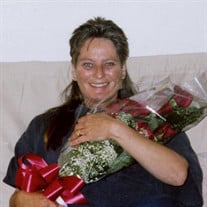 Lisa Belle Shellenberger, 57, of Wesley, passed away peacefully in her sleep, at home, at 12:40 PM on Saturday, April 2, 2022. She was a loving wife and mother. She is survived by her husband, David; two sons, Jacob and Benjamin; one brother, Peter Kerwin of Sacramento, California; and one sister, Amy Schoppmann of Northglenn, Colorado. She was born May 24, 1964, in Auburn, California, to Donna (Cavender) Kerwin and Roger Kerwin. Growing up, she loved motorcycles and dirt bikes, water sports, and the ocean. She loved the Pacific Ocean for its calmness, and for its whales and dolphins, which are often visible from the shore. Lisa was fiercely independent, having left home at the age of 13. She had a sweet but strong-willed nature. In addition, as she herself, would tell anyone, she had character. Lisa had a very colorful life. After leaving home, she came to live in the San Francisco Bay area, working wherever she could, and eventually renting a small cabin on the beach. For a time, she worked picking grapes in the California vineyards, where the Mexican women would watch over her and make sure she had regular hot meals. She also traveled with a carnival, where she worked as a young cotton candy hawker. Despite leaving home and school at an early age, she eventually obtained her high school diploma and two college degrees. Later, she studied optometry, and did optician work, making eyeglass lenses. She worked a variety of jobs, including a lot of restaurant work. Although Lisa suffered from some medical conditions, when the opportunity to open a local restaurant was presented, she declared, "I'm going to stop dying, and start living". She passed away just before its scheduled opening. She had long made it known that she wished to be cremated, and that her ashes were to be scattered across the Pacific. Lisa was a beautiful one-of-a-kind woman, with a very big heart. She touched a lot of lives, and she will be sorely missed. The family will receive friends 2:00 PM, Monday, April 11, 2022, at Brashears Funeral Home. A memorial service will follow at 3:00 PM. Services are entrusted to Brashears Funeral Home and Crematory of Huntsville.

Lisa Belle Shellenberger, 57, of Wesley, passed away peacefully in her sleep, at home, at 12:40 PM on Saturday, April 2, 2022. She was a loving wife and mother. She is survived by her husband, David; two sons, Jacob and Benjamin; one brother,... View Obituary & Service Information

The family of Lisa Shellenberger created this Life Tributes page to make it easy to share your memories.

Send flowers to the Shellenberger family.