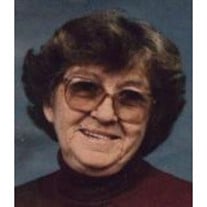 Leah June Eubanks, 76, of Japton, Arkansas, died December 28, 2010 at her home. She was born June 20, 1934 at Thorney, Arkansas,the daughter of Olen Winston and Ida May McElhaney Allison. She was a former employee of Claymore Manufacturing Company in Huntsville and a member of the Japton Church of Christ. She was the widow of Jake Lafayette Eubanks who preceded her in death on December 18, 2010. She was also preceded in death by two brothers, Lynn Allison and Luther Allison and by two sisters, Lois Demery and Letha Atha. Survivors include: one daughter and son-in-law, Anita and Donald Miller of Japton, Arkansas; two brothers and three sisters-in-law, Lee and Mary Lou Allison of Joplin, Missouri, Clyde and Donna Allison of Webb City, Missouri and June Allison of Elkins, Arkansas; two sisters-in-law and one brother-in-law, Nova Duncan of Georgetown, Arkansas and Elsie and Mack Samuels of Fayetteville, Arkansas; three granddaughters and grandsons-in-law, Andrea and Nick Korte and Jamie and Terry Limson, all of Huntsville, Arkansas and Amie and Dustin Miller of Clifty, Arkansas; six great-grandchildren, Kalei Korte,Eli Korte, Morgan Limson and Taylor Limson, all of Huntsville, Arkansas and Payton Miller and Kristyn Miller, both of Clifty, Arkansas. Funeral services will be held at 10:00 A. M. Friday, December 31, in the chapel of Brashears Funeral Home with T. J. Bennett, Minister officiating. Interment will be in the Grosse Cemetery under the direction of Brashears Funeral Home www.brashearsfuneralhome.net of Huntsville, Arkansas. Pallbearers will be: Dusty Miller, Terry Limson, Nick Korte, Lonnie Clark, Danny Clark and Gary Atha. Honorary pallbearers will be grandchildren. The family will receive friends from 5:00 P. M. to 7:00 P. M. on Thursday at the funeral home.

Leah June Eubanks, 76, of Japton, Arkansas, died December 28, 2010 at her home. She was born June 20, 1934 at Thorney, Arkansas,the daughter of Olen Winston and Ida May McElhaney Allison. She was a former employee of Claymore Manufacturing Company... View Obituary & Service Information

The family of Leah June Eubanks created this Life Tributes page to make it easy to share your memories.

Send flowers to the Eubanks family.