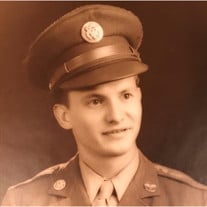 Lavon Verdon Watson, Husband, Daddy, Granddad, and Great Granddad passed away on November 6, 2017 surrounded by family and friends. Lavon, a lifetime resident of Madison County, was born on April 23, 1920 in Matte, Arkansas to Everett Verdon Watson and Nancyann Lawson Watson.Lavon graduated from Huntsville Vocational School in 1938. He drove a milk route during high school so that he did not have to walk the 14 miles roundtrip to school. He graduated from the University of Arkansas at Fayetteville with a Bachelor of Science Degree in Agriculture in 1941. While studying for his Master's Degree in Economics, Lavon joined the U.S. Army Air Force, serving as an instructor for pilots and gunners during WWII, primarily at Fort Myers, Florida.Shortly before leaving the military, Lavon glimpsed the love of his life, Evelyn Bates. Typical of Lavon in whatever endeavor he undertook, he pursued her until she said "yes." They were married on December 14, 1946, after Lavon convinced Evelyn to marry prior to the end of the year, so he could utilize the tax deduction. They celebrated their 70th wedding anniversary last year. After completing his military obligations, Lavon began looking for farmland to purchase. He and his new bride settled on the "Clyde Berry Place" in Wesley, Arkansas.In addition to farming, Lavon was postmaster at the Wesley Post Office for approximately seven years, sold insurance, and taught returning WWII Veterans agriculture in the evening, using the money to buy cattle and expand the farm. Lavon and Evelyn were a successful and innovative team, finding commercial scale solutions to the growing poultry industry. In fact, they built and operated experimental broiler houses for Campbell Soup Company, with Lavon serving as a Grower on the local board. Madison County recognized them as Farm Family of the Year in 1961.As a community leader, Lavon served on the Huntsville School Board for 32 years, on the Board of the Washington County Farmers Mutual Fire Insurance Company over 42 years and on numerous other boards. Many individuals sought Lavon's advice on personal and financial matters.Lavon served God after being baptized as a young adult. He attended the Wesley Church of Christ for over 70 years. In his "spare time", Lavon loved to fish and introduced many youth to the sport of fishing. In later years, Lavon and Evelyn loved to take long fishing adventures to Canada. Despite the business success, Lavon believed his two most important accomplishments were a successful marriage and his three daughters. Lavon collectively called them "his girls." He later admitted that it was nice to have some men in the family when his daughters married.Lavon is survived by his wife, Evelyn, his three daughters and their families, Patty Watson Lueken and her husband Whit of Little Rock, AR and son Whitten, Linda Watson Brannan and her husband Steve of Wesley, AR, two children, Melissa and Stephen and two grandchildren, Kay Watson Tait and her husband, Robert of Plano, TX and two children, Walker and Veronica. Lavon also has three surviving brothers, Loy Watson, Rick Watson and Kim Watson. His sisters, Ilene Bennett and Glenda Holloway and "near brothers", Clarence and Kermit Stanfield predeceased him.Lavon's life celebration is scheduled for 10:00 a.m. on Saturday, November 11, 2017 at Brashears Funeral Home Chapel in Huntsville, AR. Pallbearers will be his grandsons, Stephen Brannan, Whitten Lueken, and Walker Tait, his nephew, Jerry Holloway, and members of the Wesley Church of Christ Family, Phillip Johnson and Nick Clark. Honorary pallbearers are the Board Members and staff of the Washington County Farmers Mutual Fire Insurance Company. Interment will be at the Wesley Community Cemetery. In lieu of flowers memorials may be made to the Wesley Cemetery, c/o Jay Moffett, 418 Madison 7305, Wesley, Arkansas 72773.

The family of Lavon Verdon Watson created this Life Tributes page to make it easy to share your memories.

Send flowers to the Watson family.