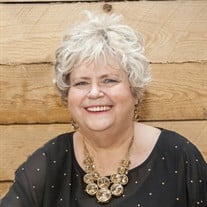 Kathy Lynn Edmisten, 76, of Huntsville died Friday, March 5, 2021, at Circle of Life Hospice, Springdale. She was born Monday, July 24, 1944, in Paragould to Ben Mathis and Wilene Raley Dollar.Kathy married Jerry Dee Edmisten on Saturday, June 30, 1962 in Huntsville, and together they were parents to four children.  She was employed by the Huntsville School District as the speech and drama teacher for many years. Kathy adored her students and her "Drama Kids" were part of her earthly treasures.  She was a member of St. John's Catholic Church and loved life passionately.  Kathy was preceded in death by her parents, Ben Mathis, and Bill and Wilene Dollar.  She is survived by her husband, Jerry Edmisten of the home; one son and daughter-in-law, Shawn and Tammy Edmisten of Huntsville; three daughters and two sons-in-law: Raina Edmisten of Goshen, Shannon and Dion Rooney of South Barrington, Illinois, and Becky and Delbert Wages of Huntsville; seven grandchildren: Christian (Melissa) Rooney, Rachel Rooney, Shane Rooney, and Isabelle Rooney, all of Chicago, Illinois, Brittney (Joe Jones) Edmisten, Jarred Edmisten, Alex Edmisten, and two step-grandchildren: Cody (Sarah) Wages, and Echo Wages, all of Huntsville; six great-grandchildren: Bailey Caldwell, Carter Jones, Blaze and Razzlynn Wages, and Aspen and Ruger Wages, all of Huntsville; two sisters: Bennie Burks of Batesville, and Terrie Pennington of Bentonville; one brother, Bill Dollar of Fayetteville; and a host of beloved nieces and nephews.A private family service will be held at St. John's Catholic Church; with a public celebration of life held at a later date.  In lieu of flowers, memorial donations in Kathy's name may be made to Circle of Life Hospice, 901 Jones Rd, Springdale, AR 72762; or the Huntsville Food Pantry, 400 West Street, Huntsville, AR  72740.  Services are entrusted to Brashears Funeral Home and Crematory of Huntsville.

The family of Kathy Edmisten created this Life Tributes page to make it easy to share your memories.

Send flowers to the Edmisten family.