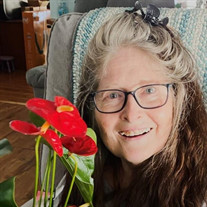 Judy Ann Mars, 64, of Rogers; passed away Tuesday, March 29, 2022, at home. She was born Thursday, February 20, 1958, at Van Buren; to William Doyle and Bessie Pearl Mayo Moses. Judy married Donald Mars on Tuesday, April 29, 1986 at Cassville, Missouri; and was mother to one daughter. She was a homemaker and a member of Spring Valley Baptist Church. Judy loved nature, and was looking forward to going home to be with Jesus. She also dearly enjoyed spending time with her family and never met a stranger. Judy was preceded in death by her parents. She is survived by her husband, Donald Mars, of the home; one daughter and son-in-law, Freda and Josh Wallace, of Havana; three grandchildren, Kristina and Ryan Gault; Addison Wallace, and Bentli Wallace, all of Havana; two great-grandchildren, Jaxson Gault and Parker Gault, both of Havana; and one sister, Teresa Moses of Lamar. The family will receive friends 1:00 PM-1:30 PM, Friday, April 1, 2022, at Brashears Funeral Home. Graveside service will be 2:00 PM, Friday, April 1, 2022, at Aurora Cemetery with Randall Galloway officiating. Pallbearers will be Josh Wallace, Leonard Mars, Ryan Gault, Steve Mars, Gary Mars, and Bryan Reynolds. Services are entrusted to Brashears Funeral Home and Crematory of Huntsville.

The family of Judy Mars created this Life Tributes page to make it easy to share your memories.

Send flowers to the Mars family.