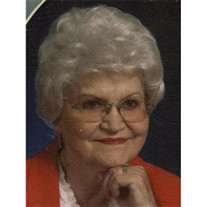 Josephine Nancy Harris Dillahunty, 98, of Huntsville, Arkansas, died January 19, 2015 at Meadowview Healthcare and Rehab in Huntsville, Arkansas. She was born August 18, 1916 at Huntsville, Arkansas, the daughter of Grover T. and Annie Hawkins Harris. She was a homemaker, a member of the Huntsville United Methodist Church and the widow of Maurice D. Dillahunty, whom she married on September 15, 1935 and who preceded her in death on November 9, 1987. She was also preceded in death by one daughter, Nancy Carolyn Dillahunty and eight siblings. She graduated from Huntsville State Vocation School where she was given an award in Little Rock, Arkansas for her excellent sewing. She spent the majority of her married years in Wichita, Kansas. During World War Two, Maurice served his country in Europe and Josephine served her country as one of the "Rosie the Riveters". She worked on the gunner section of the B-29 Boeing Aircraft. Survivors include: two brothers and sisters-in-law, Jim and Gladys Harris of Huntsville, Arkansas and Bob and Dee Harris of Bryan, Texas; one sister, Roberta Appleton of Huntsville, Arkansas and many nephews and nieces, great-nephews and great-nieces and great-great-nephews and great-great-nieces. Funeral services will be held at 1:00 P. M. Friday, January 23, in the chapel of Brashears Funeral Home with The Reverend Rob Ernest officiating. Interment will be in the Alabam Cemetery under the direction of Brashears Funeral Home www.brashearsfuneralhome.net of Huntsville, Arkansas. Pallbearers will be: Chuck Harris, Lance Davis, Darrin Davis, Matt Uhrich, Brian Phillips, Jeff Phillips, Vance Davis, Jim Couch and Larry Fliss. Memorials may be made to the Huntsville United Methodist Church, Post Office Box 1257, Huntsville, Arkansas 72740-1257.

The family of Josephine Nancy Dillahunty created this Life Tributes page to make it easy to share your memories.

Send flowers to the Dillahunty family.