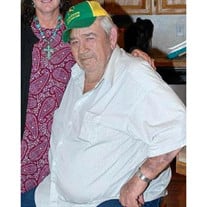 Joe Blaine Carter, 76, of Marble, Arkansas, died April 9, 2018 at his home. He was born October 12, 1941, the son of Vernon and Sybil Carter. Joe was a cattle farmer who enjoyed hunting and fishing. He also enjoyed visiting with friends and... View Obituary & Service Information

The family of Joe Blaine Carter created this Life Tributes page to make it easy to share your memories.

Send flowers to the Carter family.