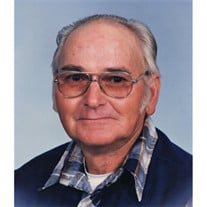 Jesse McClelland Comer, 88, of Huntsville, passed away November 25, 2018, at Meadowview Health and Rehab in Huntsville.   He was born September 9, 1930, in Hot Springs, New Mexico; to Jesse and Iva Jones Comer. Jess married Dorothy Kelley in Reno, Nevada. They were married 72 years and were parents to five sons.  He was a farmer, and had retired from Daisy & Anderson Propane. Jess was predeceased by his parents, his brothers, his sisters, and one son, Jesse Comer, Jr.  He is survived by his wife, Dorothy, of the home; his sons and daughters-in-law, Roger and Karen Comer of Hindsville, Lee and Gayle Comer of Huntsville, Kenny and Peggy Comer of Huntsville, and Carson and Patty Comer of Fontana, Kansas; several grandchildren, great-grandchildren, and great-great-grandchildren. There is no formal visitation.  Jess will be in state from 3:00 - 6:00 PM, Thursday, November 29, 2018 at Brashears Funeral Home.  Funeral services will be 10:00 AM, Friday, November 30, 2018; at Brashears Funeral Home and Crematory with Dwayne Lane and Jim Kelley officiating.  Pallbearers will be Michael Comer, Casey Comer, Christoper Comer, Jack Comer, Heath Comer, Anthony Giffin, Hesston Comer, and Jerrod Comer.  Honorary pallbearers will be Kent Usrey, Justin Usrey, and Gary Bohannan.  Interment will immediately follow at Union Chapel Cemetery in Garfield.  Services are entrusted to Brashears Funeral Home and Crematory of Huntsville.  In lieu of flowers, contributions may be made in Jess's memory to the Alzheimer's Association, 225 N. Michigan Ave., Fl. 17, Chicago, IL 60601.

The family of Jess McClelland Comer created this Life Tributes page to make it easy to share your memories.

Send flowers to the Comer family.