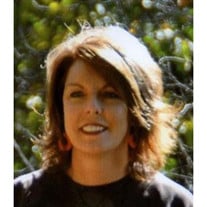 Janet Lea Glenn, 49, of Elkins, Arkansas died November 15, 2015 at Circle of Life Hospice Home at Springdale, Arkansas. She was born December 13, 1965 at Fayetteville, Arkansas the daughter of Lloyd Elbert and Clara Lou Whorton Wheeler. She was a Baptist, and past president of the Madison County Rodeo Board and past board member of the Northwest Barrel Racing Association. She had been the office manager at Meadowview Healthcare & Rehab in Huntsville for over fifteen years. She was preceded in death by her father, Lloyd "Jamup" Wheeler and her father-in-law, Curtis Carson Glenn, Jr. Survivors include: her husband, Devin Glenn of the home; one son, Kase Glenn of the home; one daughter, Jessica Dawn Fields of the home; her mother, Clara Lou Wheeler of Elkins, Arkansas; one sister, Dana Kay Wheeler Brandenburg of Elkins, Arkansas; her mother-in-law, Judy Glenn of Elkins, Arkansas and her brother-in-law and sister-in-law, Duane and Sarah Glenn of Elkins, Arkansas. Funeral services will be held at 10:00 A.M. on Thursday, November 19 in the chapel of Brashears Funeral Home with Seth Jones and Tully Butler officiating. Interment will be in the Patrick Cemetery under the direction of Brashears Funeral Home www.brashearsfuneralhome.net at Huntsville. Pallbearers will be: Ron Cooper, Phil Speegle, Vernon Whittmore, Mike Jones, Kendall Proctor and Robert Sizemore. Honorary pallbearers will be: Betty Easley, Jennifer Sizemore, Sabrina Bowen, Melba Sharp, Erena Thomas, Kim Proctor, Jimmy Lackey, Brenda Jones, the Madison County Rodeo Board and the Meadowview Healthcare & Rehab staff. Visitation will be 5:00 to 7:00 P.M. Wednesday at the funeral home with the family present. Memorials may be made to the ALS Association, Arkansas Chapter, 1200 West Walnut, Suite 2309, Rogers, Arkansas 72756.

The family of Janet Lea Glenn created this Life Tributes page to make it easy to share your memories.

Send flowers to the Glenn family.