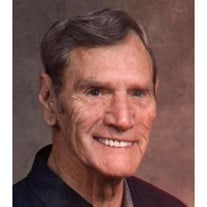 Harrel Chancellor, 93, of Huntsville, Arkansas, died May 1, 2015 at his home. He was born June 13, 1921 at Mulberry, Arkansas, the son of Johnnie and Alice Neal Chancellor. He was a graduate of the University of Arkansas School of Pharmacy,... View Obituary & Service Information

The family of Harrel Chancellor created this Life Tributes page to make it easy to share your memories.

Send flowers to the Chancellor family.