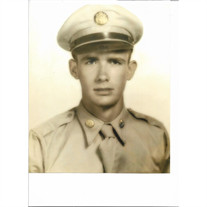 Godard LaVern Burkes, 86, of Hindsville, Arkansas died December 3, 2017 at Meadowview Healthcare and Rehab at Huntsville with his loved ones at his side. He was born December 27, 1930 in the Hindsville/Clifty community of Lone Star, the son of Elmo C. and Burna Ethel Cook Burkes. He was a veteran of the United States Army proudly serving in the Korean War as a radio operator. He was a farmer and tool and die operator at Tulsa Products and Brewer Lay and retired from the University of Arkansas. He was preceded in death by his wife of fifty years, Louise Barnett Burkes, one daughter, Martha Burkes Williams, his parents, two brothers and wives, Keith and Barbra Burkes and Ardith "Shorty" and Florence Burkes, two sisters and husbands, Matilde and James Morrow and Beatrice and Jess Dew, three nephews, Doug Burkes, Carl Burkes and William Dew and two nieces, Peggy Howard Williams and Lisa Burkes Hatcher. Survivors include: one daughter and husband, Brenda and Silvester White; one son-in-law, Lynn Williams; four brothers and wives, Lionel and Pansy Burkes, Earl and Othenia Burkes, Glen and Richie Burkes and Loy and Gracie Burkes; one sister and friend, Wanda Howard and Roy; two grandsons and wife, Christopher and Kelly White and Joshua White; three granddaughters and husbands, Lori Williams and Jason Drummond, Amanda White and Juston Ramirez and Julie Williams and Andy Chapman; ten great-grandchildren, Brinsyn and Piper Ramirez, Kaitelynn, Brooklynn, Josslyn and Christopher White, Alexander Wise White, Kale and Kasen Drummond and Linly Chapman; and many nephews and nieces. Funeral services will be held at 10:00 A.M. Thursday, December 7 at the Brashears Funeral Home chapel with Reverend Max Bowlin officiating. Interment will be in the Shorty Burkes Cemetery under the direction of Brashears Funeral Home www.brashearsfuneralhome.net at Huntsville. Pallbearers will be: Christopher White, Joshua White, Juston Ramirez, Jason Drummond, Andy Chapman and Dale Burkes. Honorary pallbearers will be Meadowview Healthcare and Rehab employees who loved Godard as much as his family does.

Godard LaVern Burkes, 86, of Hindsville, Arkansas died December 3, 2017 at Meadowview Healthcare and Rehab at Huntsville with his loved ones at his side. He was born December 27, 1930 in the Hindsville/Clifty community of Lone Star, the son... View Obituary & Service Information

The family of Godard LaVern Burkes created this Life Tributes page to make it easy to share your memories.

Send flowers to the Burkes family.