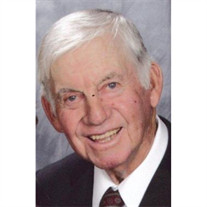 Gerald Truman Bennett, 82, of Hindsville, Arkansas died February 18, 2014 at Circle of Life Hospice in Springdale, Arkansas. He was 82 years and 11 months old, born to Margie Samantha (Duncan) and Charles Allen Bennett on March 3, 1931 at Whitener, Arkansas. Gerald was an Army veteran stationed in Germany during the Korean Conflict. He worked at logging, trucking, bulldozing and cattle ranching. But his bestlove was his cattle ranching on and around his mountain. At almost 83 years of age, he was still doing the work of a young man. He was a deacon of the Drakes Creek Regular Baptist Church, a member of the Cattleman's Association and the American Legion. The Bennett family was chosen Farm Family of the Year in 1975 for both Madison County and the Northwest District. Gerald is survived by his wife, Charlene (Taylor) Bennett, daughters Samantha Polen, husband David and son, Paul of Tulsa, Oklahoma; Stacy Bennett and son, Bennett Stecklein of Springdale, Arkansas; Diana Taldo, husband Terry and daughter, Addison of Tontitown, Arkansas; sister, Fern Bennett Phillips of Tulsa, Oklahoma; cousin, Genevie Stroud of Hindsville, Arkansas and several nephews and nieces. Preceding him in death are his parents and siblings, Ona Bennett, Mildred Middlemas, Talou McCollough, Imogene Bennett, Tillman Bennett and Luther Bennett. A celebration of his life will be held at the Drakes Creek Regular Baptist Church on Saturday, February 22, at 10:00 A. M. with The Elders Jim Duncan and John Napier officiating. There will be time to visit with fmaily and friends in the fellowship hall after the service. A light meal will be served. In lieu of flowers, memorial may be made to Circle of Life Hospice in Springdale or a charity of your choice. Arrangements are under the direction of Brashears Funeral Home www.brashearsfuneralhome.net of Huntsville, Arkansas.

The family of Gerald Truman Bennett created this Life Tributes page to make it easy to share your memories.

Send flowers to the Bennett family.