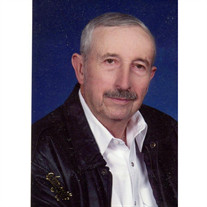 Francis E. "Frank" Fitch, 84, passed away July 27, 2018 at his home in Hindsville, Arkansas. Frank was born October 27, 1933 in Wichita, Kansas. He moved to Hindsville, Arkansas with his parents when he was 6 months old and continued to live there for the rest of his life. Frank was a lifetime farmer. He ran a dairy operation in his younger years, and was a poultry grower for many years, along with the family beef cattle operation which he continued to contribute and take an interest in until his death. Frank's other career, which he referred to as his hobby, was driving a school bus for Huntsville schools. He drove the bus for at approximately 67 years, and hauled four generations of children over his long career as a bus driver. He was also a devoted fan and attendee of the Rodeo of the Ozarks and attended every year from the very first year of the Rodeo in the mid 1940's until this year. He never missed a single year, often attending several nights in a row, for many of those years. Frank was also an avid member of the Madison Co. Farm Bureau and took an active part in the monthly meetings for many years, serving as its president at one time. Frank was predeceased by his wife Charlene, his parents Eva And Francis Ellery Fitch, his brother Eugene Fitch, sister Pauline McCoy, nephew Don McCoy, and great granddaughter Tristan Marlena Fitch. He is survived by his son Nevada Fitch (wife Betty) and their children Trampas Fitch (wife Miriam) and Maggie James (husband Robert) and Nevada's son Shannon Middleton (wife Lovie) and their children Alexcia and Allisyn. Frank is also survived by his daughter Latonda linker (husband Gary) and their sons Cody Linker (fiance Mary Beard and son Liam) and Derek Linker (girlfriend Nicole Bergeron). Frank is also survived by his longtime companion Jodie Dickinson, and host of other family and friends. He attended Crossroads Community Church. Services will be held at Brashears Funeral Home And Crematory in Huntsville, Arkansas on Wednesday, August 1st    at 10:00 A.M. with Rocky Bell officiating,  visitation on Tuesday evening, July 31st at Brashears Funeral Home from 6:00-8:00 P.M.. Interment will be at Buckeye Cemetery. Pallbearers will be Nevada Fitch, Cody Linker, Derek Linker, Trampas Fitch, Billy Grigg, and Paul Andrews. Honorary Pallbearers are Gary Linker, Kenneth Grigg, Todd Grigg, and Junior Parker. The family wishes to thank the wonderful staff of Circle of Life Hospice for all of their support and encouragement during this transition in Frank's life. We could also like to extend heartfelt appreciation to Pam Burks, Tina Watson, Luella Wood, Mike Skaggs and the caregivers of We Care Home Care.

Francis E. "Frank" Fitch, 84, passed away July 27, 2018 at his home in Hindsville, Arkansas. Frank was born October 27, 1933 in Wichita, Kansas. He moved to Hindsville, Arkansas with his parents when he was 6 months old and continued to live... View Obituary & Service Information

The family of Francis "Frank" Fitch created this Life Tributes page to make it easy to share your memories.

Send flowers to the Fitch family.