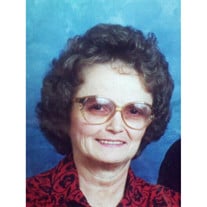 Fonda Faye Johnson Callaway, 88, of Boston; died Wednesday, April 7, 2021, in Huntsville.  She was born January 16, 1933, at War Eagle; to Edward Otto and Ruby Alice Silvis Johnson.Fonda married Henry Dale Callaway on Sunday, October 23, 1949; and devoted her life to God, her husband, their children, and their community.  She and her family built a life around farming, raising chickens, dairy cattle, and planting large gardens.  She and Dale were founders of the New Home Quartet where she sang alto, alongside her brother, Foye Kay; and nephew, Larry. The New Home Quartet traveled several miles to sing God's praises, performed at many funerals, and recorded an album in 1969.  In Fonda's earlier years, she was active in the local EH Club, a 4-H Leader, member of the PTA, and was involved in her family's activities.  Church and family was her life, and the kitchen was her domain.  Fonda was preceded in death by her husband of 52 years, Dale; her parents; one brother, Jean Johnson; one sister, June Bennett; one son-in-law, Tony Pretty; one grandson, Trenton Pretty; and one great-grandson, Bryce Eklund.  She is survived by her son and daughter-in-law, HD and Shelly Callaway of Boston; and three daughters and two sons-in-law, Beverly Pretty of Fayetteville; Darlene and Melvin Smith of Cleveland, Mississippi; and Dollie and Dennis Donahou of Combs;  her grandchildren, Mechelle Smith, Amy and Bryan Newpher, Travis and Sunny Pretty, Laura Pretty, Tonette and Kasey Weathers, Derek Donahou, Denisa and J.R. Mayes, Anthony and Darcy Donahou Blok, Trevor Smith, Damien Eklund, Heath and Kayla Eklund, Casey Poole, and Cassie Poole; 19 great-grandchildren, four great-great-grandchildren; one brother and sister-in-law, Foye Kay and Louise Johnson.Graveside services will be 11:00 AM, Saturday, April 10, 2021; at New Home Cemetery with Derek Donahou officiating.  Pallbearers will be the grandchildren. In lieu of flowers, memorial donations in Fonda's name may be made to New Home Cemetery Building Fund, 12116 Highway 16, Combs, AR  72721.  Services are entrusted to Brashears Funeral Home and Crematory of Huntsville.

The family of Fonda Callaway created this Life Tributes page to make it easy to share your memories.

Send flowers to the Callaway family.