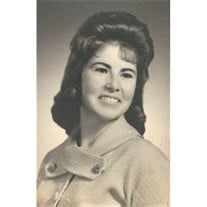 Fern Bennett Thornberry, 68, of Boston, Arkansas, died August 20, 2013 at her home. She was born October 19, 1944 at Boston, Arkansas, the daughter of Otto and June Johnson Bennett. She was a homemaker and farmer, a member of the Church of Christ and was preceded in death by her mother and one brother, Calvin Bennett. Fern always found great happiness in serving God and others. She looked forward to church services, loved to sing God's praises and enjoyed fellowship with other Christians. She loved almost everyone that she met, so therefore, she was loved by all that knew her. When she was just 14, she and Doug fell in love and on December 22, 1961, they were married. Their marriage of 51 ½ years was filled with happiness and they endured their hardships together, remaining side by side to the very end. Fern treasured the fact that for all of her sixty-eight years she lived very close to her parents, grandparents, brothers, sister, aunts, uncles, nieces, nephews, cousins and later on her kids, grandkids and great-grandkids. She always put everyone else's needs before her own. Because of the Godly life that she lived, we have full assurance that she is now in God's care, along with all her loved ones who have gone on before. Survivors include: her husband, Douglas Thornberry of the home; one son and daughter-in-law, Charles and Cindy Thornberry of Boston, Arkansas; one daughter and son-in-law, Charlotte and Jeff Haire of Combs, Arkansas; her father, Otto Bennett of Boston, Arkansas; one brother and sister-in-law, Glen and Joann Bennett of Boston, Arkansas; one sister and brother-in-law, Janice and Herby Jordan of Boston, Arkansas; five grandchildren, Christy Thornberry, Courtney Starnes, Katie Thornberry, Kendall Haire and Chad Thornberry and two great-granddaughters, Adalyn Starnes and Emery Starnes. Funeral services will be held at 2:00 P. M. Friday, August 23, in the chapel of Brashears Funeral Home with Pat Mannon, Minister officiating. Interment will be in the Combs Cemetery under the direction of Brashears Funeral Home www.brashearsfuneralhome.net of Huntsville, Arkansas. Pallbearers will be: Chad Thornberry, Kendall Haire, Josh Starnes, Jason Wilson, Brian Bennett, T. J. Bennett, Scott Jordan and Shane Jordan. The family will receive friends from 5:00 P. M. to 7:00 P. M. on Thursday at the funeral home. In Lieu of flowers, memorials may be made to Arkansas Children's Hospital Foundation, Post Office Box 2222, Little Rock, Arkansas 72203-2222 or Washington Regional Hospice, 34 Colt Square Drive, Fayetteville, Arkansas 72703.

Fern Bennett Thornberry, 68, of Boston, Arkansas, died August 20, 2013 at her home. She was born October 19, 1944 at Boston, Arkansas, the daughter of Otto and June Johnson Bennett. She was a homemaker and farmer, a member of the Church of Christ... View Obituary & Service Information

The family of Fern Bennett Thornberry created this Life Tributes page to make it easy to share your memories.

Send flowers to the Thornberry family.