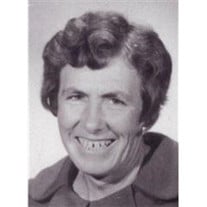 Eula Fern McCollough, 87, of Kingston, Arkansas, died April 11, 2011 at Meadowview Healthcare and Rehab in Huntsville, Arkansas. She was born April 10, 1924 at Kingston, Arkansas, the daughter of John Sid and Hope Claire Parker Sugg. She was... View Obituary & Service Information

The family of Eula Fern McCollough created this Life Tributes page to make it easy to share your memories.

Send flowers to the McCollough family.