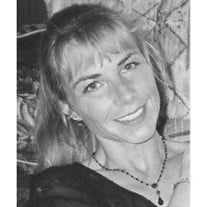 Elizabeth Suzanne May, a former naturalist-interpreter and resident of Fayetteville, AR, died unexpectedly on July 13, 2015 at the age of 45 at home. Elizabeth is survived by her parents; Charlene DeVito (Chris), Harrison AR and Alan May (Ann), Gastonia, NC; her sister Lindsay Hennarichs (Kyle), Springdale, AR; her brother Brandon DeVito (Amy), Bryant, AR; her children, Dustin Staneart and Sierra Burnham, Fayetteville, AR; her grandmother, Jeanetta May, Little Rock, AR; uncles Joe Mains (Shari), Fayetteville, AR, and Doug Mains (Joanie), Centralia, MO; aunts Mary Ella Krebs (Eric), Meadow Vista, CA, Janet Wilkerson (Don), Austin TX, and Cynthia May, Austin, AR. She is predeceased by her grandmother, Mary L. Mains; and her grandfathers, L. Charles Mains and Jack May. Elizabeth was born in Biloxi, MS on July 24, 1969 to Alan May and Charlene Mains. She graduated from the University of Arkansas in 1996 with a degree in Earth Science and worked as an Interpreter-Naturalist for Pinnacle Mountain State Park, Little Rock, AR. On December 6, 1989 and February 2, 1999, she welcomed Dustin and Sierra respectively, who were an important part of her life. Elizabeth enjoyed hiking and backpacking in the Boston Mountains, lived in Indonesia and Bahrain and traveled to France, and was a musician and singer. She also enjoyed trips to Holden Beach, NC and visiting the NC Aquarium at Southport, NC, and the Schiele Museum of Natural History on her frequent visits to Gastonia, NC. She enjoyed playing the piano and beadwork. She designed and crafted bracelets, necklaces, and jewelry as well as crafted fragrances for the home and bath. She will be deeply missed by her friends, family, and all who knew her. A celebration of her life is planned for August 22, 2015 at the Botanical Garden of the Ozarks from 1:00 PM until 3:00 PM in Fayetteville, AR. Condolences may be offered online at Brashears Funeral Home, Huntsville, Arkansas www.brashearsfuneralhome.net.

Elizabeth Suzanne May, a former naturalist-interpreter and resident of Fayetteville, AR, died unexpectedly on July 13, 2015 at the age of 45 at home. Elizabeth is survived by her parents; Charlene DeVito (Chris), Harrison AR and Alan May (Ann),... View Obituary & Service Information

The family of Elizabeth Suzanne May created this Life Tributes page to make it easy to share your memories.

Elizabeth Suzanne May, a former naturalist-interpreter and resident...

Send flowers to the May family.